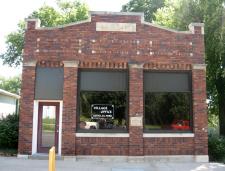 "The wild, untapped prairies of Nebraska attracted many people. Hiram Hendricks, a native of Virginia, came to Nebraska in 1856, where with his wife Cicily, he registered a pre-emption claim on 160 acres in the southwest corner of Otoe County. The precinct was named in his honor.
When the county organized, Hendricks became justice of the peace, and their home served as a polling place for elections -- a convenient arrangement since he was a judge over voting procedures from 1859-61. Instrumental in organizing the Methodist Episcopal Church, the couple's home often was the "meeting place" for itinerant preachers.
Life on the prairie was not easy, as evidenced by Hiram Hendricks death on November 21, 1861, at the age of 53, leaving his wife and 11 children to work the farm. By this time many settlers had arrived, which provided some measure of protection for the family. On February 28, 1863, a post office was established and given the name "Hendricks."
In 1864 Irish-born Simpson McKibbon and his bride, Harriet Douglass, settled on a homestead in Hendricks Precinct. In 1872 he added to his holdings by buying a quarter-section of land from Anton Klaus. In a story of his life written many years later, it is noted, "...McKibbon's foresight in settling just where he did was rewarded, when a very short time after, part of this farm was divided up into lots and people were beginning to be convinced it was a good place to settle." It was also noted, "...the Missouri Pacific Railroad was grading its right-of-way."
The town's name evolved during an interesting series of events. A deed (registered in 1887) transferred a strip of land from the McKibbons to the MP. Thomas B. Stevenson, a noted Nebraska City lawyer, was then contacted by McKibbon and Tom Smith to assist in the platting of a village. On June 20, McKibbon received $3,200 for land and seven specific lots "...in the Village of Hendricks." On July 19 Stevenson and his wife Annie signed papers "...dedicating streets, alleys, and highways for public use." The following week, however, lots were being sold in the village, which was now called "Douglas."
Several theories have been suggested as to the reason for the change. Some suggest that the railroad had another station named Hendricks [none found in the records], or that the name "Douglas(s)," the maiden name of the former land-owner, was part of the "deal" when deeding the land to either the railroad or to the Stevensons. Another consideration could be that the first postmaster, George Douglas, was somehow involved. The name of the post office was officially changed from Hendricks to Douglas on October 29, 1888.
An impressive array of businesses sprang into being along the town's main street. A photo, taken in front of the bank in the 1890s, recalls the names and occupations of 30 or more "businessmen," two of which are listed as "loafer."
The town's population reached 305 in 1910. Since then, shifts in population due to economic trends, employment opportunities, and available services are noted in the decades of census records. The current population is 210.
The school, established as soon as there were families enough to warrant it, grew from a one-room structure to an accredited K-12 institution. Reduced by low enrollment to a K-6 for many years, District 44 will merge with the Sterling school system in May 1993.
Celebrating its centennial in 1988, Douglas proudly published the "Centennial Yearbook," stories of its history, and took stock of the many interesting and important events during the first 100 years of its life." (1)
Cemeteries:  Complete listings on Members Only Page.
Klaus Family Cemetery
Mount Zion Cemetery
Rose Hill Cemetery
St. Martin's Catholic Cemetery
Solon Cemetery

DO YOU WANT A DNA workshop ?- Let us know!!! We'll assist finding your connections using DNA!  Details coming soon - be sure to sign up at the Resource Room or Email us!

Thank you for your continued support - we need your membership to maintain our special projects & research.  If you haven't - please go to the Membership page for membership form/address. Be sure to check out the Syracuse, Elmwood, Seward and many other area newspapers ONLINE !!  Links are provided to the left of this side bar.

Meetings are the 3rd Saturday of the Month - watch our FB page and our website for details each month.

This is a link to other states newspapers:

Syracuse Museum of Memories - Looking for Volunteers.  They meet every Wednesday, 9AM.  Open every Sunday afternoon - May-October, else by Appointment.  See their page on our site for further details.